Imagine a hardwood forest where some of the trees growing there are over 100’ tall and up to 6 feet in diameter. Producing wonderful, rot resistant, straight ,grained lumber these same trees – every fall - would also drop thousands of edible nuts onto the forest floor. This was a reality, here in the forests of southern New Hampshire. The tree species just described, was the American Chestnut.

At one time this tree species was found all the way from Southern Georgia up to the southern coast of Maine. In the 1800’s over 4 billion – yes billion – were found in the forests of the Appalachians. It was estimated that 1 out of every 4 trees in this region were chestnut. Although not as prolific in the forests of NH or VT, where it was found it grew well and in abundance. In Vermont it was mainly found in the Connecticut River Valley and the Lake Champlain/Rte 7 corridor. In New Hampshire it was found from Tilton to the seacoast and also in the Connecticut River Valley. It was one of those rare species of tree that could grow well in the frigid cold winters of New England or the scorching hot summers of the South. It was a resilient species that seemed to grow well where the soils were not real great – either rocky and dry or nutrient poor. 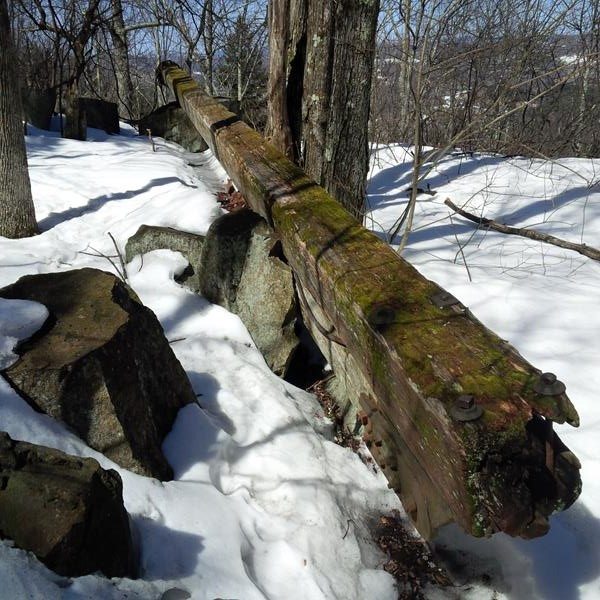 Chestnut was prized for the uniform quality of its wood along with its rot resistance. Despite being dense, it was light, straight grained and easy to work with. These characteristics enabled it to be made into a large variety of wooden products. Although not exhaustive the list included: mine timbers, rigging, railroad ties and high quality furniture. To the right you can see a picture that was taken of a chestnut beam that was used as rigging for a granite quarry on the north side of Mt Ascutney. Over 100 feet in length and nearly 100 years old – it still sits there. With immense size , height and little decomposition it acts as testimony to what amazing wood came from this tree species. When it comes to furniture, I can testify to the beauty found in anything made from chestnut. My grandmother has a kitchen table made from it. It too is nearly 100 years old and even after all these years it still is durable and has a beautiful copper color and rustic charm that few other species have.

Another quality that made the American Chestnut so special was its ability to consistently produce vast amounts of edible mast. These were found in the form of spiky green hulls that would drop from the tree in the fall. Upon drying out, these spiky green hulls would “pop” open and inside would be a couple of nutritious nuts. Historical records have shown that a stand of chestnut would produce up to 2000-3000 lbs. per/acre every year ! This abundance of nuts not only fattened all forms of forest life but it also fattened many a hill farmer’s livestock as well. There was even enough left over for foragers to gather and sell in markets in the city. At Christmas time, especially, chestnuts were in high demand. Roasting chestnuts over heat of some sort was an American pastime right up there with apple pie and baseball.

We would still have this wonderful species with us today except for the fact that a virulent blight came to our shores in 1904. Originating from China, it was brought into the port of New York on ornamental Chinese chestnuts. These ornamentals were resistant to this fungus but unfortunately our native American Chestnut was not. Fast moving, within less than 50 years , the blight had, for all intents and purposes, wiped out every single one of our American Chestnuts. Compounding its demise ,was an aggressive harvesting program promoted by the US Forest Service, to cut every live American Chestnut before the blight hit it and rendered the tree economically worthless. Sadly, many a beautiful chestnut was cut before its time and turned into a railroad tie or mine rigging. How many of these may have survived the blight – we will never know.

What Does The Future Hold

Since the chestnut blight took its toll, work had been taking place to try and bring back this monarch of the forest. The American Chestnut Foundation, has been instrumental in helping to spearhead this. Their work along with that of “hobby” enthusiasts such as Vermont farmer Randy Knight etc.. have made huge strides in helping to insure that this tree becomes a part of native forest once again.

If you are looking for a forest resource and wildlife management professional then please call 1-800-237-9253 or complete our online request form.