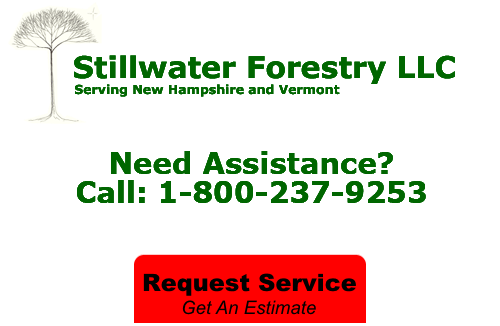 Being a large plant, trees are left with few options when faced with imminent danger. Rooted to the ground, they are unable to pick up and move, when faced with a threat . So to live in an unforgiving environment like the outdoors, they have adapted mechanisms for survival that enable them to recover and thrive. This is particularly evident when we see their ability to recover after something as destructive as a severe weather event. This was really made evident to me recently while I was working out in New Hampshire refurbishing a property line. While working along I suddenly stopped and noticed this Beech tree that had been severely damaged quite some time ago.

Based upon the rot and aging of the damage it was clear to me that this tree had suffered major damage during the infamous ice storm of 1998. The ice load had been so heavy that the tree broke in half three quarters of the way up the stem. At that point in time, all that remained was a broken stub.

To any casual observer, even a trained forester as myself, the conclusion would have been that there is no way this tree would ever recover. It would have been assumed that death would be the natural outcome. However, here we are 17 years later and we are looking at a tree with a crown that has grown back vigorously. It helps that this tree is an American Beech – a species know for prolific stump sprouting – but regardless the evidence is visible – trees are trough!

Ironically enough I began my career as a forester in April of 1998. I worked in and around the hills and mountains of southern Vermont. My first marking job for the forester,for whom I was employed, involved a salvage sale in Bridgewater, VT on a stand of timber that had been severely damaged by that ice storm. The damage was immense and we ended up having the logging contractor cut most of the trees with severe crown damage. The tree pictured above would have been a prime candidate for removal. The assumption would have been that it wouldn’t survive without a crown. However we can see now - trees have a way of surprising us!

If you are looking for a New Hampshire forestry or Vermont forestry management professional then please call 1-800-237-9253 or complete our online request form.